Thing 2 recently made a new cover for her Nook e-reader. It's the newer, smaller version of the Nook, so the original New York themed cover that she made doesn't fit (too bad because it is so cute and well made!) But this one is even better! 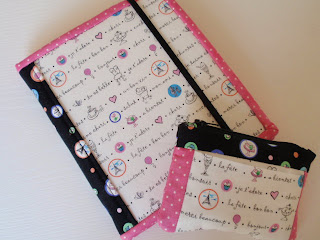 C'est magnifique! She altered the Atkinson Reader Wrap pattern to this Nook's smaller size by cutting the pattern pieces 7.75" high instead of 8.5" indicated in the pattern. An easy change that you can make too if you've got a newer Nook and this pattern handy. She also used four pieces of elastic headband to hold the reader in place since the pocket on the original interfered with the touch screen. The coordinating zip pouch to hold the charging cord was made using the Atkinson Ca$h and Carry Pocket Zip pattern. 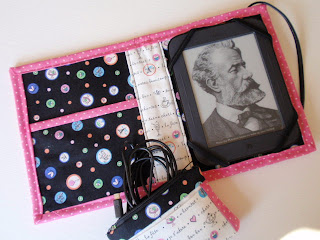 The fabrics are from my stash; so fun and fitting for this point in her life. She's become a bit of a Francophile thanks to a golden birthday trip to Paris, French language lessons at school, and movies her parents repeatedly watch such as "Midnight in Paris", "A Good Year", "Julie and Julia", "Chocolat"... the list goes on and on. 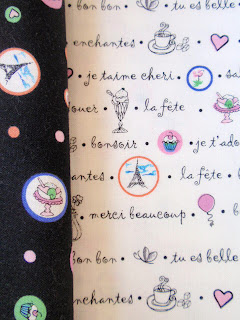 The fabrics were originally from my friend Vicki's stash but came into my hands via her fabric de-stashing "garage sale". Thanks, Vicki! 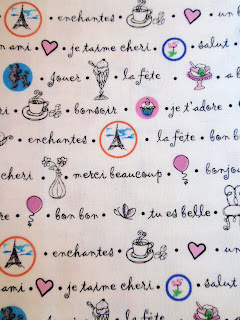 Thing 2 has also recently expanded into the blogging world with a fellow Francophile student at eiffelinlouvrewithfrance.blogspot.com. They've got a list of over 100 fun, French topics planned to share! If you stop over, leave her a comment telling her that her maman sent you :) Merci beaucoup mon ami!
Posted by Shelley at 4:12 PM