My long term piecing project - The Tree of Life quilt top - has been sent off for some heavy-duty custom quilting. I dropped it off last week with my long-arm quilter, Carol. The top is about 83" square, so I wasn't about to tackle that by myself! 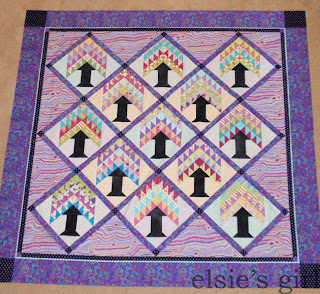 I knew that I wanted some dense custom quilting rather than an all-over background pattern. Carol suggested I choose a wool batting (which I have never used before) to make the quilting really stand out. I'll confess that while making this quilt, I decided that when it was finished I would enter it into a judged show - something I've never done before. Maybe the upcoming September show in Madison, WI will be the one. Wool batting is supposed to spring back from being folded better than cotton batting and also hang better, so wool it is.

Several quilting designs were churning around in my head, so I tried some out on graph paper (love that stuff!) to see what I really liked best. First I drew a grid of most of the entire top of the quilt to figure out the scale of blocks vs. sashing vs. borders. On this go-around I sketched out my top ideas for sashing quilting... 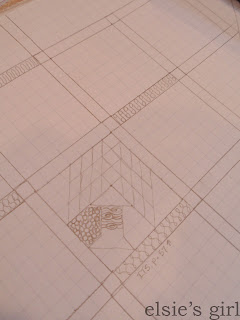 Then I made a larger diagram of a single tree block to see what filler patterns looked good in the backgrounds... 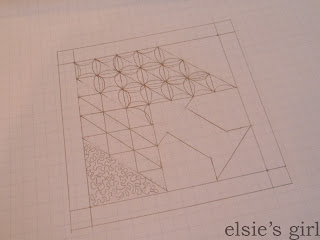 It seemed that adding a little color to the diagrams would help with choosing thread colors, and by this point I had also wised up to the fact that if I made copies of the diagram I wouldn't have to keep drawing them over and over to avoid erasing. Duh. 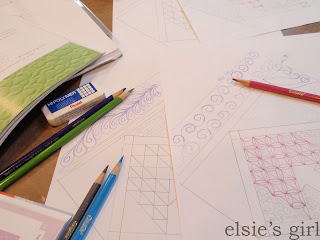 Design decisions for the tree blocks were made pretty quickly, but the border decision took much longer. I am not a fan of "feathers" in quilting designs. I know lots of people think they are beautiful and flowing and organic, but to me they just look like (and forgive me if this ruins your love of feather quilting) intestines. I know, gross, right? But that's what immediately comes to my mind every time I see them! So here I am doodling away trying to find something that is appropriately scaled and dense enough to stand up to the block quilting designs I've chosen and not be stuck with feathers. Leaves? Nope - not dense enough. Spirals? Nope - scale is all wrong... 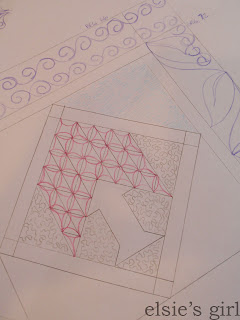 And here is my attempt at a variation of feathers that includes swirls (you know I love swirls!) but this one just looks like intestines drawn by Dr. Seuss. Definitely not the right theme... 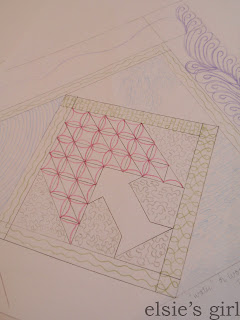 I ended up choosing a pattern from Carol's library of border designs that incorporates a little bit of leaf with some swirl action too. Whoops - I should have drawn it before leaving her house so I could show you here!

Carol will be using many colors of thread - magenta, turquoise, sea green, gray, purple, yellow, and a blue green to add lots of dimension to my already colorful quilt top. It won't be ready until early July, and already I can't wait to see it!

I pulled all of the sketched quilting designs from three different books, all great references to have in your quilt book library:

And lastly, a funny story about this quilt that should have a photo accompaniment, but doesn't... I purchased a couple of different border fabrics that I really liked (at the time) about 2.5 years ago when I first had this tree quilt idea. But now they seem kind of ridiculous (and on the verge of [gasp!] ugly) so I pieced them into the backing. Said backing was hanging over my upstairs railing a couple of weeks ago when my husband spied it and (pointing to the ridiculous fabrics) said to me, "Did you buy that fabric? I mean, did you pay money for it?" Hilarious!