I wish I had more progress to show you on this quilt, but it's been slow-going here in the sewing room this past week. I've been working on a little hand embroidery project for my LQS and trying to finish that up and get the directions written. I'm excited to show it to you next week - it's a Valentine project!

As I wrote last week, I really wanted to use some red in the sashing for this quilt, and lucky me (!), I found the perfect one buried deep in the red drawer. Red with pink dots - yes, please! 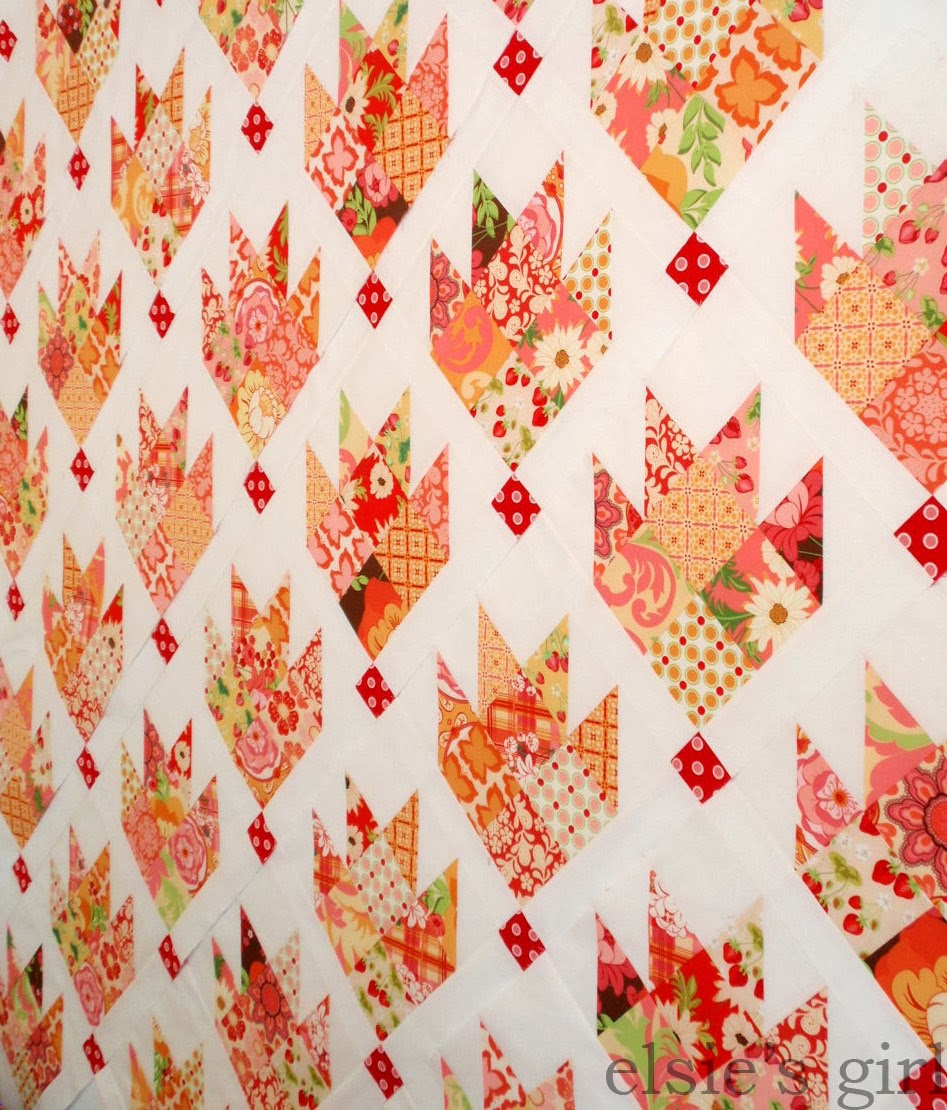 My bear paw blocks have been transformed to a field of tulips... 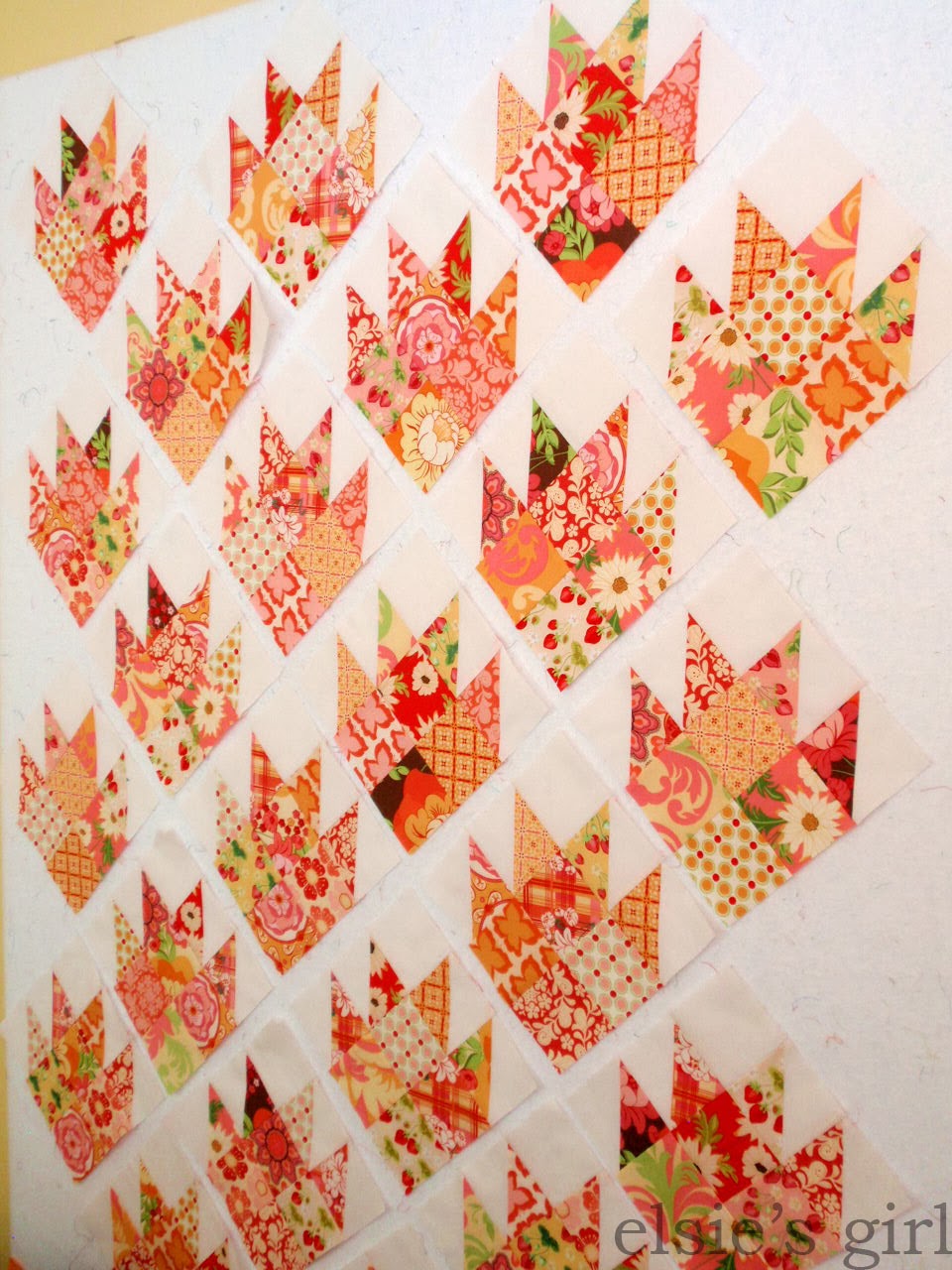 Last week I rescued these lovely fabrics (Meadowsweet by Sandi Henderson) from the depths of my stash and joined a few other quilters on Instagram in starting a scrappy bear paw quilt. (This is the sort of impulsive decision that is a direct result of not having a 2014 goal list prepared, but that's another story for a different day...) 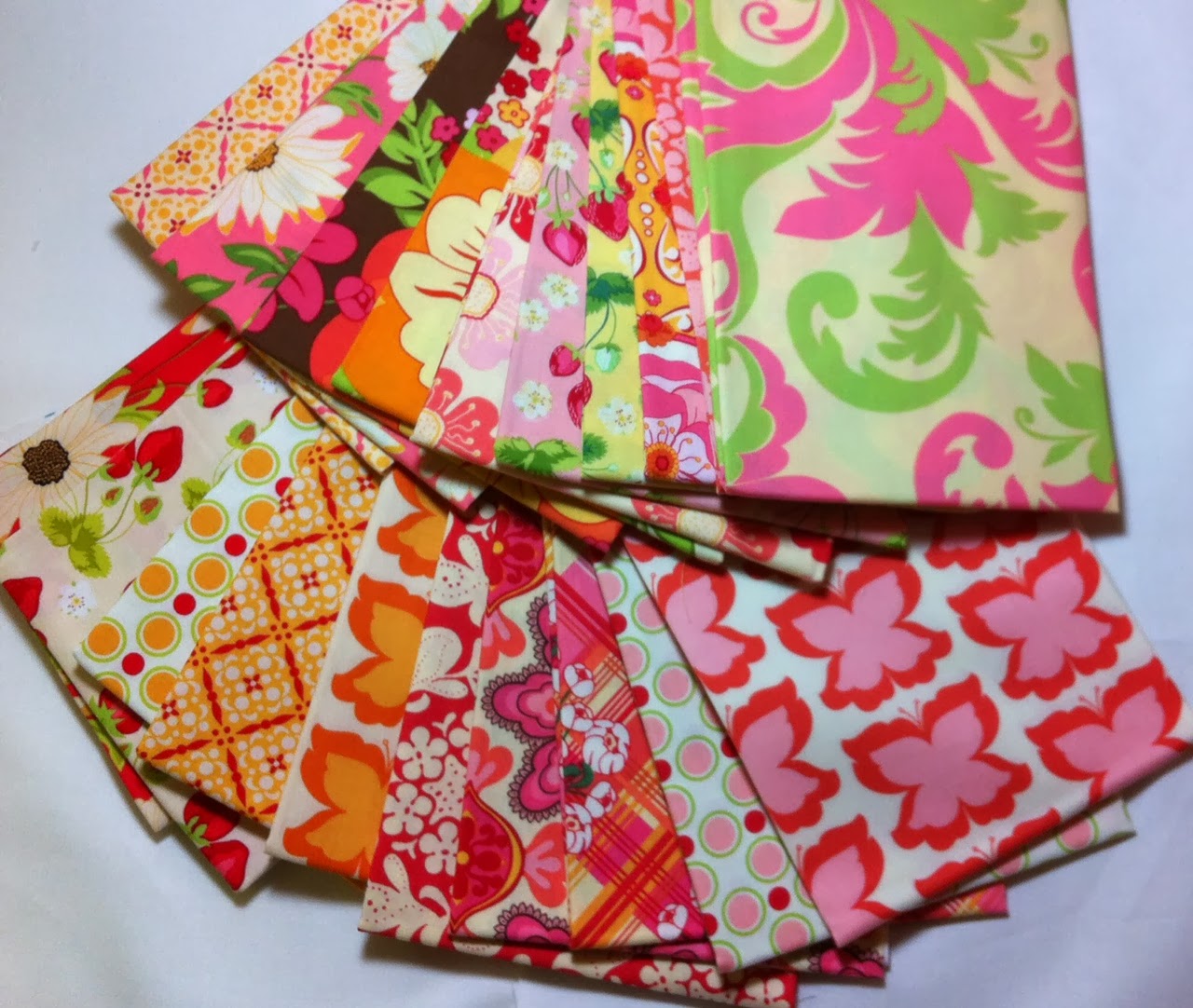 I'm generally a needle-turn kind of girl when it comes to hand-applique, but for this project I'm using a different method for all the leaves since there are 24 of them. 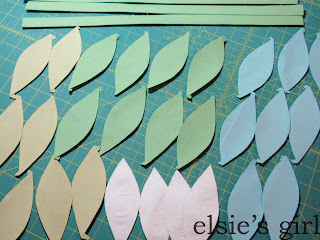 Great progress to report - the sashing and cornerstones as well as the first border on the Amish with a Twist quilt are completed!

The Kona Snow sashing and the random colored cornerstones finish at 3" wide. Combined with the small corner squares in each of the blocks, the cornerstones give the setting sort of an Irish Chain feel. I like that! 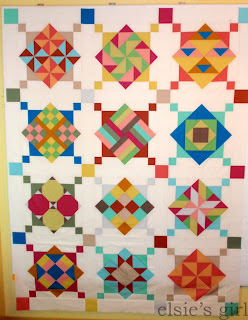 Since this pattern is structured as a block-of-the-month program, the directions called for strip-piecing the piano key border in sections as I cut and sewed each of the blocks. After all 12 blocks were completed, I had about 8 different color versions of 4-strip border sections already pieced, cut and ready to go. Whew! 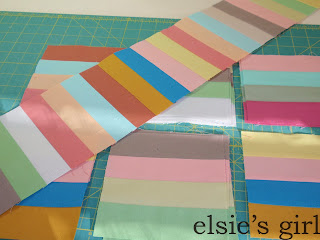 It felt like there were thousands of those 1.25" strips needed to make up the border, and I was soooo glad the only work remaining was to sew the already made 4-strip sections into the long border pieces. 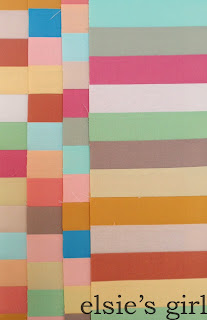 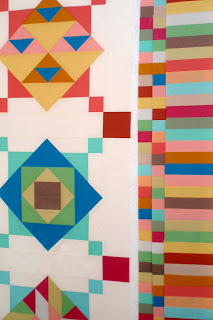 And now the top is too big for the design wall, so I had to drape it over the railing to get a shot of the entire thing! The size now is about 65" x 85". 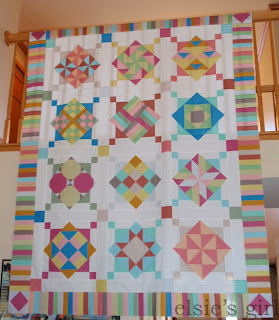 While pressing the border seams, I had the ironing table set up in front of a sunny window. As I was flipping the quilt top over, I caught a glimpse of it with the sun shining through it, so I taped it in front of my sliding glass doors to get the "stained glass" effect photo... 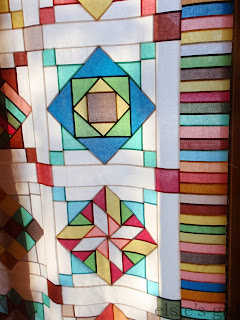 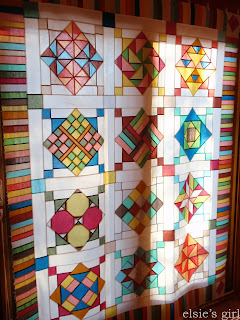 All that remains now is the final border of applique. I've decided to hand applique all the stems, leaves, and flowers because I think it looks so much prettier. And I want this to be really pretty for my mom :)

Hand-applique is a time-consuming process, so progression from here will be slow-going. I just can't sit for hours at a time doing hand sewing work; I save it for an hour here and there in the evenings while I'm watching/listening to the TV. I'll continue to show you my progress, but it won't be as drastic and exciting. This is still my #1 sewing priority, but I'll be working on other things now during the prime daytime sewing hours.

I think I'm still on track for a Mother's Day finish!

and this is the reason I always buy extra fabric

While sewing all the corner units to set the "Amish with a Twist" blocks on point, I realized that a few of my blocks didn't match those shown in the quilt pattern photo. What?! And I had been so careful labeling everything and translating it from the black background version color chart!

The Diamond Star and Flying Geese quilt blocks do not contain that pewter grey color in the pattern quilt (and I didn't much care for how dark it made these blocks anyway) so I remade them swapping the pewter for a light pink. The revised versions are on the left in the photos below.

Less dreary = much better :) And I'll just toss those extra blocks into the "future kitchen sink quilt" bin where they will be resurrected into something fabulous far into the future...

But for now, the word of the year is FOCUS. As in keep-your-head-down-and-finish-this-quilt-before-starting-anything-else focus!

The on-point setting triangle units are all pieced and sewn onto all of the blocks ... 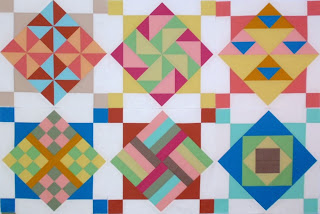 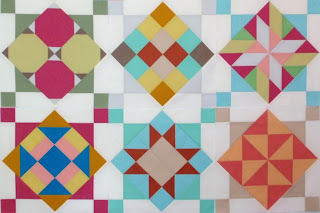 Sashing and cornerstones are up next for these blocks and then two borders. Yay for progress!!
Posted by Shelley at 4:18 PM 3 comments:

We're covered in snow here in Northern Illinois with more expected this weekend. Perfect weather for sewing and online house hunting for properties in the southeastern region of the US! Quite a bit of both has been happening around here these first few days of 2014, but on to the sewing update...

I'm making progress on the Amish with a Twist quilt for my mom. All 12 block centers are completed, and the corner pieces needed to set them on point are cut.

Blocks 7-9 feature the stitch and flip method of adding triangles to the edges of squares or rectangles. Snowballs, diamond stars, and flying geese are just of a few of the blocks you can sew using this technique.

Blocks 10-12 combine techniques from all the previous blocks to create Hole in the Barn Door, traditional Square-in-a-Square, and Birds in the Air...

You may have seen photos and blog posts very recently about the Economy Block quilt along going on now with Brenda at Pink Castle Fabrics, Katy at I'm a Ginger Monkey, and Rita at Red Pepper Quilts. The economy block is a traditional square-in-a-square. The quilt along is focusing on using up scraps and stash to make these fun blocks - something I should definitely jump into! But I'm trying to maintain focus and get this quilt top finished. It's my #1 sewing goal for this year.  Ideally I'd like it to be completed in time for Mother's Day, which right now in the depths of snow and cold feels like years away.